So much has gone onn recently, that I see I haven’t been keeping up to date on my blog.  First off, let’s talk about the Dam to Dam half marathon that I ran on May 30.  It was a cold and wet start to the race, and since the porta-pottiy lines were so long, I had to run 1.5 miles until I had to stop.  I lost some time, but I had 2.5 hours to finish the race so I could meet up with the group I mentor in No Boundaries and run their “graduation 5k” with them.  I really wanted to be there with them, and that was the driving force behind my run.  Even with a potty break, I finished in 2:14 and found the group.  I even had a moment to catch my breath before we started out again.  It was a wonderful day!

Sunday, June 14 was the day of the Copper Creek Triathlon.  It’s a sprint triathlon with a 750 meter swim (820 yards), 20k bike ride (12.4 miles), then a 5k (3.1 mile) run.  I’ve been worried about this event, as it was going to be my first open water swim.  I have only done triathlons in a pool, but this was in a lake with waves of swimmers taking off.  It was hard to keep my nerves in check in the days up to the race.

We prepped the bikes and had our bags packed and loaded the night before (my wife competed as well).  All that was left was to relax, watch the Blackhawks in the Stanley Cup final (they won and lead 3-2) and go to bed.  But sleep would not come.  I was going over scenarios of what could happen in the lake.  I wasn’t worried about the bike or the run, it was the lake that had my full attention.

Finally the alarm went off: 4:00 a.m.  Time to clean up, eat, and drive to the parking area for the opening of the transition area so we could set up.  You could feel the nervous tension in the truck, as it was my wife’s first open water event as well.  We got parked, and the first problem reared it’s ugly head: I had a broken wheel spoke.

I didn’t have time to remove the spoke, as that would have required taking the tire off.  But I couldn’t leave the broken part dangling, as it could possibly poke a hole in my inner tube and cause a flat tire, ruining my day.  So we improvised: we bent the short part of the spoke untill it rested on the rim, and we used electrical tape to hold it in place.  It was far enough back so it wouldn’t touch the brake area, so I said a prayer and headed to transition to rack my bike.

Once we were set up, we milled around until it was time to get into our wetsuits and line up for the swim.  I was also getting hungry, as I had eaten breakfast at 4:30, and the race started at 8:00.  My heart and mind were racing, thinking about running into that water.  I was in wave 4, and I heard the announcer say “Wave one, in the water”, and I thought we were starting.  But they made wave one wait between two buoys… they were treading water before beginning!  I have trouble treading water even in a wetsuit!  That didn’t help the nerves.

Waves two and three did the same routine; tread water until the cannon blast told them to start.  Suddenly it was wave four’s turn.  I got out to chest deep water when I heard the marshall say “You have three minutes.”  I spoke to a couple of others in my wave, and we decided to stay back until one minute was called.  When the marshall gave that call, we swam out and treaded for 20 seconds until the cannon blast.  We were off!

I tried to stay to the outside of the pack, knowing I would be slower and I didn’t want to get overrun by faster swimmers.  My nerves had my heart rate going, and I was finding it hard to breathe.  I used my inhaler earlier that morning, but this felt like an asthma attack.  I wondered why I thought I could do this, and how could I get out of here.  Then I thought of everyone who has encouraged me, supported me, and helped me on this journey. I could not give up until I reached the first buoy, that much I knew.

It took forever for that buoy to get close, and when I made the turn I could see buoy #2 a short distance away.  I thought that if I quit there, I at least made it half way.  Suddenly, I was halfway!  I started to calm down, I gained control of my breathing, and decided to take my time and finish this thing.

Then in the midst of feeling good about swimming, another problem came up… I was swimming in seagrass.  I used someone else as a spotter, and they were off course.  So I needed to angle over to deeper water and sight buoy #3 for myself.  It took a little effort, but I finally made the turn and was heading for home.

I could see the exit, but it never seemed to get closer.  I thought surely I would touch ground and run out, but this lake was deep where the exit was, and I almost swam up to shore before I stood up.  I had made it!  820 yards with others all around me, and I made it!

I ran slowly to transition.  I felt as if I was out of gas, but I has to keep moving.  I ripped off my wetsuit, donned my helmet, put on socks and bike shoes, and ate a Huma Gel.  I shoved some Honey Stinger chews in my back pocket (I wore my tri suit under my wetsuit) and ran out of transition.

The ride was 12 miles, but I was not expecting as many hills as they had.  We followed USAT rules regarding no drafting and no blocking.  That meant you had to pass within 15 seconds or stay 3 bike lengths behind another rider.  There were marshalls on motorcycles travelling the course and writing out penalties.  We rode out and back, and one steep hill I had conquered would give a fast ride down on the way back.  When I reached that part of the race I remembered: I had a broken spoke to worry about.  If I blew out a tire now, the results would be catastrophic.  So when I hit 31 miles an hour, I started lightly pumping the brakes to keep me from going any faster.  I was happy to see transition for two reasons: one, that worry was behind me, and secondly because my mentor Stephanie and my training partner Kara was there to greet me.  It was an awesome surprise, but hellos would have to wait as I had a 5k to run.

Transition 2 went fast: off went the helmet, gloves, and bike shoes; on went the running shoes and I grabbed my water bottle.

The run was an almost steady incline up, followed by a decline and a lap around the lake.  My legs were about done after the ride, but as I rounded the first corner, I saw my friend Jodie and her husband cheering me on.  They had stopped by the transition area before the race to wish me luck, but I didn’t think I would see them on the course, or that they would still be there.  That helped the legs feel a little better.

Before I knew it, the halfway point was in view.  I turned and headed back for the finish.  One long path around the lake, and I saw the finish line.  I heard the announcer say my name.  I made it.  I did it!

I went and hugged my friends Kara and Stephanie, and we watched together as Connie McGarrah, a friend whom I admire for all the success she has when training and competing, crossed the finish.  Then my wife Julie crossed the finish line.  Julie was pretty emotional after she crossed the line, and she has a right to be.  Having back issues like she does, and still trains and competes in an event like this is simply amazing!

Now we train until the next one.  The way it sounds, it may be sooner rather than later! 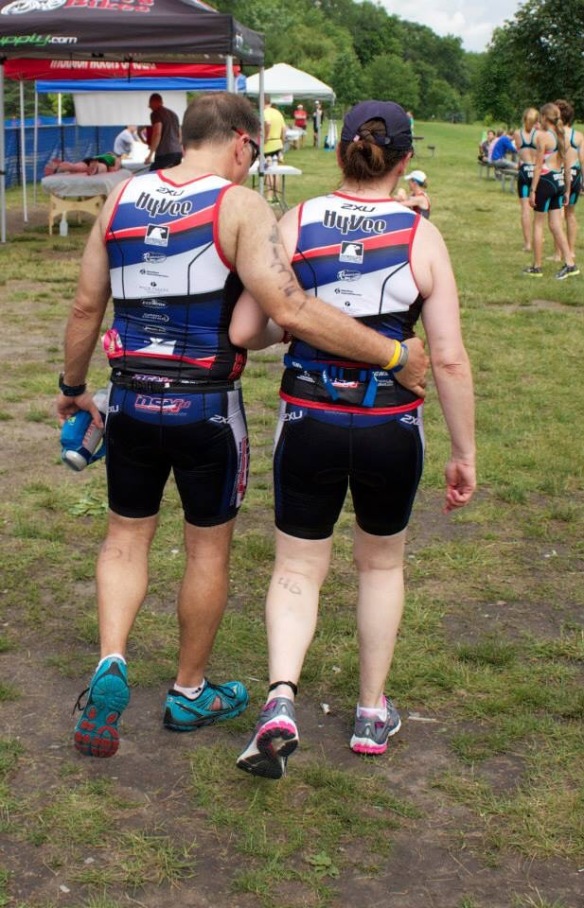