The Hot Chocolate 5k was Sunday, and while it would have been a normal race with the exception for the chilly temperatures and the wind, there was something remarkable about this particular event. It was the first 5k race for my wife Julie! She has been training, and while running is somewhat hard on her due to back pain, she has pushed on and been running three miles with me in our neighborhood.

A couple of weeks before the 5k, my friend Stephanie texted me and asked if I wanted to do the event with her. I jumped at the chance, as Stephanie and I have logged in many miles together and I consider her a mentor as well as a dear friend. I failed to mention to Stephanie that my wife was running, and after our conversation I asked Julie if she wanted to run with us. I was excited when she said “yes”. We decided to surprise Stephanie and kept Julie’s running a well guarded secret until we were to meet up with Stephanie on race day.

We agreed on a meeting spot before the race, and when we arrived I asked Julie to hang back a little in hopes that Stephanie would not see her right away. That didn’t work, as Stephanie spotted her right away. Then she noticed Julie was wearing a bib number! The surprise on Stephanie’s face was priceless. She hugged us both and after chatting for a bit with Stephanie’s husband Paul, and our friend Justin who was running the 5 mile event, we lined up and got ready to run.

The race went well, and Julie stayed consistent throughout the run, finishing with a time of 38:50! She stopped only to sneeze because of the cold, and to grab a water, and pressed on. To say I am proud of her is an understatement. It took a lot of courage to train with a bad back, yet she did and she succeeded! I hope that she joins me in other runs in the future. 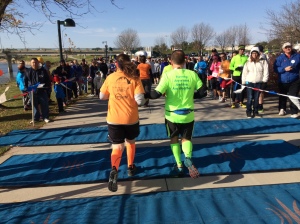 Julie and I crossing the finish line together at her first 5k. 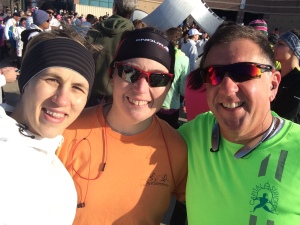 Stephanie, Julie, and I at the Hot Chocolate 5k.

Thank you Paul for making us all breakfast after the run! What a great Sunday!