It’s been a fun and hectic week around here.  First up: the YMCA Pieathlon, which is a sprint triathlon (400 yard swim, 10 mile bike, 5k run) where you get pie at the end.  My wife Julie and I both signed up, trained, and was raring to go on race day.  Not to say we weren’t nervous, but that seems totally normal as we feel we never train enough.

We arrived at the YMCA at 5:45 a.m. to set up our transition stations.  Even though this is considered a “fun beginner” event, it never hurts to practice so you’re ready for the bigger, more serious races.  We chatted with friends until 7am, when we were given our instructions and we started to line up at the pool.  The swim is the weakest for me, so I milled toward the back of the line, figuring on a finish of between 9:30-10min.  Since we were in our Des Moines Tri-Club gear, people were teasing us that we should be in the front of the line.  We chatted and watched the faster swimmers, until suddenly I was told to get in the pool.  It was go time!

I started off steady, trying to control my breathing and not going too fast and wearing myself out.  I was fine until 300 yards, when I started to feel tired.  I told myself, “you’ve only got 100 yards left! You can do it”.  I had to let one faster swimmer pass me, but I also passed one swimmer, so that was a draw.  Once I pulled myself out of the pool, I hit my watch to start transition.  8:50 was the swim time!  I was pretty happy about that!

I ran from the pool area to the outside transition area, threw on my bike shoes, helmet, sunglasses, and headed out of transition.  I took off when I was allowed, and was hitting 20-23 mph pretty easily.  The issue was passing people on the trail while others were heading back.  Then at the turnaround, there was a headwind that slowed me way down, that and being tired.  Time on the bike: 32:36 with an 18 mph average.

I ran back to transition, threw off the helmet and bike shoes, and put on my running shoes.  I opted to not put on socks, and that was a big mistake.  By mile two I could feel the blisters forming on my arches, and by the end it was hurting to run.  It also took about a half mile for my legs to feel normal after the bike.  Final for the run: 28:59 with a 9:19 mph pace. 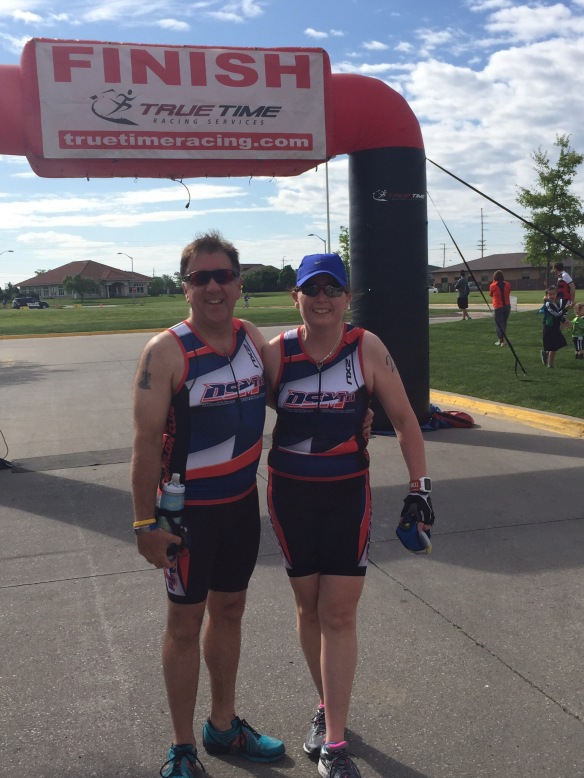 I finished in 1:14:03, which is over a minute faster from my previous attempt.  Julie finished at 1:26:23.  She did great for her first transitional triathlon.

I am continuing my triathlon training, between mentoring running groups, and getting long runs in for marathons.  I’m finding it hard to do all the training I need to do in a day.  I wish I could have a job where that’s all I did…train.  But until then, I do the best I can.  We are getting ready for Copper Creek sprint triathlon, which leads to my next topic: my first open water swim.

We started off the Memorial day holiday by going out for a run.  My wife stopped at 4.5 miles, while I opted to get one more long run in before my half marathon on Saturday.  I ran 10 miles, and while it wasn’t the prettiest or fastest, it felt good to be able to just go that distance.  I will need it and then some come Saturday, but I will explain that in a little bit.

After running, we decided to clean up and head to Raccoon River Park and try our hand at open water swimming for the first time.  We walked over to the swim area at the lake, and there was tons of people there (it was Memorial Day after all).  So we donned our wetsuits, and waded in.

Man, was that water cold!!  When I finally dove in, I thought my hands and face would freeze and fall off!  But by the time I reached the first part of the rope where you turn, I was warmed up and ready to go.  The darkness of the water and not being able to see didn’t bother me, I used it as a tool to sight the buoy rope ahead of me.  My wife however, was having issues with the cold and being unable to see.  She did make it around to the other end (375 yards) and we talked about it.  We started to walk back in the water when she decided to try again.  She swam against the current (it was choppy) for a bit and stood up.  I asked her how that felt and she replied “better”.  We decided to swim the last 75 yards to the buoy rope and the decide what to do.  She did that with no problem.  The only issue we had was that we were both starving!  I think next time I will skip the ten-mile run before swimming.  That wore me out.

Saturday is the Dam to Dam, one of the most enjoyable races I have ever run.  Even the packet pickup is a blast; with food, beer, a band … it’s just a big party.  It is also my No Boundaries group’s graduation run.  They will be running the 5k event, while I am signed up for the half marathon.  There is a 2:30 window between the start of the half, and the start of the 5k.  If I can finish quickly enough, I can meet and run with them on their first 5k race!  I have done a half in 2:04, so I think that it’s possible.  I want to run with them so badly.  It will also ramp up my mileage on running an ultra sometime this year.  Yet one more thing to train for.  lol

As you have probably read here before, I am in the midst of triathlon training to ready myself for not only an open water sprint in June, but an Olympic distance triathlon later this year.  Swimming is my weakest sport, as I sink like a rock and cannot seem to tread water.  The idea of swimming almost a mile started to seem like a far fetched idea.

But, one should not give up hope.  So to push myself a little harder, my wife and I purchased wetsuits.  I purchased what is considered an entry level Orca S5 suit.  Since the outdoor water temperature is still a little cool, we decided to try them out in the pool at the YMCA.  It wasn’t too bad getting it on for the first time, although I did have trouble getting the pull string to stay out of the way!  I made my way to an open lane, said a little prayer that everything would be ok, and jumped in.

I actually felt a little lighter in the water with it on, but then again I was just standing there.  It’s when I started to swim that I noticed a big difference.  First: I didn’t have to try so hard to beathe, as I was almost on top of the water.  Second: It seemed almost effortless, as if I was gliding along. Third: even with the full sleeves, it never felt cumbersome and I seemed to have a full range of motion.  That’s when I realized that I had swam 400 yards as my warm up!  I had never done that so easily before.  After drills, I decided to just swim laps again, and completed 750 yards non-stop!  That felt amazing, and since my first open water sprint is approximately 820 yards, I feel much better about it.

Then my wife suggested that we swim out to the deep end and and practice treading water.  Now I don’t tread water, I sink.  I don’t know why, but that’s what happens.  So I try to be brave, and swim out to the deep end and stop … and I float!  I barely moved my arms or my legs, and I was floating.  I even went one minute treading water and floating.  It was amazing, and it has me amped up to try open water swimming now!

My No Boundaries group is moving along so well that they will soon be teaching me.  Because of a graduation, only one of my team, Shirley, was there on Saturday.  We partnered with Maria, another mentor, and I asked Shirley what she wanted to do.  She said she wanted to try to run the entire 5k, but slowly and no walk breaks.  So I told her that she would set the pace and off we went.  And she did it!!  Shirley was amazing, and she finished in 34:39 which is a great time!  It has been amazing to run with this group, and between Shirley, Jennifer, Sarah, and Bob, I have learned so much.  They have taught me how to encourage people, to make things fun, to boost spirits, and to love running even more.  I can only hope that they got as much from this program that I have.

After No Boundaries was completed Cathy, another mentor in the group, asked if I was doing the “Run With the Police 5k”.  It was the first year for the race, raising interactions with the police and the community, and raising money for Special Olympics.  I told Cathy that I had not signed up, but would love to run it.  So I ran a half mile to the police station, and they were still accepting applications for the race.  I got my bib, my t-shirt, then ran a half mile back to Fleet Feet Sports.  The race was at 10 am, so we had enough time for a coffee and a pastry before walking to the starting line.  I had already logged in 4 miles, and now going to run a 5k.  I wondered how this would pan out.

The race was wonderful, with 1000 runners at the start.  We took off, and the police were everywhere, cheering us on, high-fiving runners, it was a great time.  I crossed the finish, got a great looking medal, and went through a wall of uniformed police officers all fist bumping us and congratulating us!  It was a great race, one that I will add to my “have to run” list.  I looked at my watch to see the time I finished: 26:30.  Not too bad for running 4 miles beforehand.  I stayed to cheer on Cathy, Brenda, and Cindy on as they headed to the finish.

Here is the medal we received:

Here we are after the finish:

After the run, I cleaned up, got out the bicycle, and went with on a 25 mile bike ride.  My wife, my training partner Kara, and her sweetheart Eli were there, and we stopped at Mullets for an early dinner.  It was great to see Kara and Eli again, and I hope we can ride together more often.

I had last Friday off from work, and since I had some spare time I thought it would be a good idea to get a brick workout in (two different workouts back-to-back). I decided on a 35 mile bike ride and then a run. The ride went well, averaging over 17 mph, but some soreness in my left ankle limited me to a 3 mile run. It felt fine the next day, when I had two runs totaling over 7 miles.

But this blog post focuses on the bike ride, or should I say what went with me on the ride. I attached a GoPro camera to my bike helmet, and the following video is the result. You can get an idea of the area and how beautiful it is to ride in Iowa! So let me know what you think of the video, since it is my first attempt at it.  See if you can spot the following: