I knew going in that Lake Placid would be tough. Riding in the Adirondack Mountain range would not be an easy task. I also knew that it would be beautiful, with the Winter Olympic Village, the mountain views, and a appropriately named “Mirror Lake”, this set up to be a challenging and gorgeous race.

Boy was it ever! Just driving into Lake Placid, the view is breathtaking. Mountains, streams, watching hikers and fly-fishermen enjoying the day, it was quite a peaceful and tranquil town. We arrived early, so we drove a little extra to Ottawa to meet up with my training partner, co-coach in E11even Athletics, and dear amazing friend (and co-conspirator in this madness) Kelly in White Lake, to train for a couple days before making the 3 hour drive to the venue. It was a wonderful way to start the week, catching up, relaxing, and training, before the storm of race week kicks in.

We headed to Lake Placid on Thursday morning, and after the border guard finished drooling over Kelly’s bike, we made it to Keene, NY where our AirBnB was. We were actually on the bike route! We had the afternoon for a quick workout, and exploring the town before turning in early.

On Friday, Kelly and I worked the “Become One” booth for Ironman University Coaches to assist first time Ironman competitors. It was fun, and met some amazing athletes who asked questions and sometimes just needed reassurance that they could do it!

On Saturday, we did an easy workout, dropped off bikes and run/bike bags, prepped nutritionals, and tried to relax. Did we do enough climbing? Were we strong enough to get through this course? So to pass the time and have a little fun, we followed our coach Jenni’s advice. She said to look in the mirror, hands on hips like a superhero, and say “I got this!” We did one better:

We made makeshift capes and became superheroes! It was a great way to end the evening and try to get a little sleep. 3am and race day was coming quickly!

We were at the venue (the outdoor speed skating oval) by 4:30 am, where we aired up tires, put nutrition on the bikes, checked and rechecked bikes, added stuff to run/bike bags, and then headed up the hill to Mirror Lake. 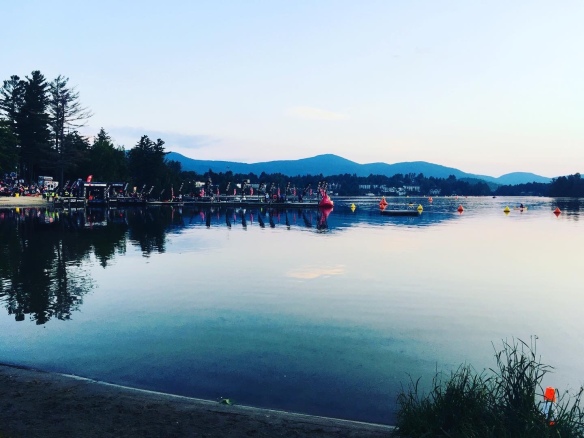 There is a cable line that’s easily seen in Mirror Lake, and if you follow it, you don’t really have to sight the buoys. The problem is, everyone tries to stay on that line, and it’s a mess of bodies hitting and kicking each other. When the gun went off, Kelly opted to swim the line, and I opted to stay off to the side and use the scrum to side sight. I have breathing issues, and don’t need it flaring up in the middle of that mess. This race is different as you swim 1.2 miles, walk back to the start, and swim 1.2 more miles. Kelly finished well ahead of me, as the scrum made for faster swimming. I swam more staying to the outside, but came in at 1:40:21 for 4800 yards (4212 official).

Then it was off to the wetsuit strippers, who make short work of getting a wetsuit off and you on your way. Then down the street to transition to grab my bike bag and onto the changing tent. Then into the bike area to grab my bike and get to the mounting line to start the 112 mile ride.

This course was by far the hardest of the three Ironman Races I’ve done. This had even more climbing, in my opinion, than Mont Tremblant. Not as steep, but also never ending. Beautiful, scenic landscapes tried to hide brutally hard and long climbs. If I had a camera with me, I would have never finished on time. It would be nice to go back and joy ride the course and stop and take pictures. But this is a race so we had to push it.

Everyone talks about the “Three Bears”; three challenging hills that are marked on the course. There’s Goldilocks too, but she is nothing compared to the Bears. What people don’t tell you, is how bad the hill before Goldilocks and after the Bears are, as they are far worse than the fabled ones. There is one nice aspect of doing the Bears: at the top of Papa Bear, the locals line the street to cheer you up the hill, much like the Tour de France! It was an awesome feeling, having those people rooting for you and getting up close! 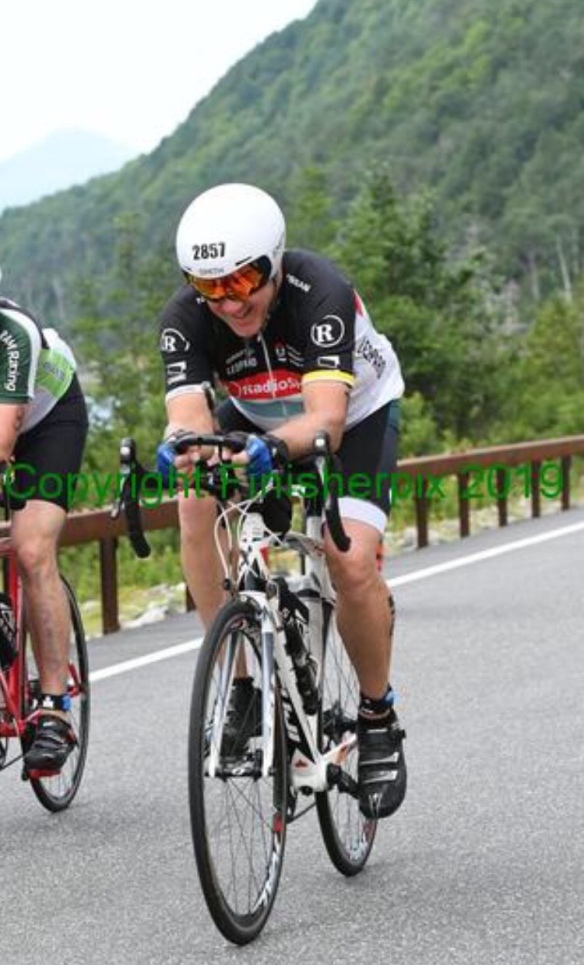 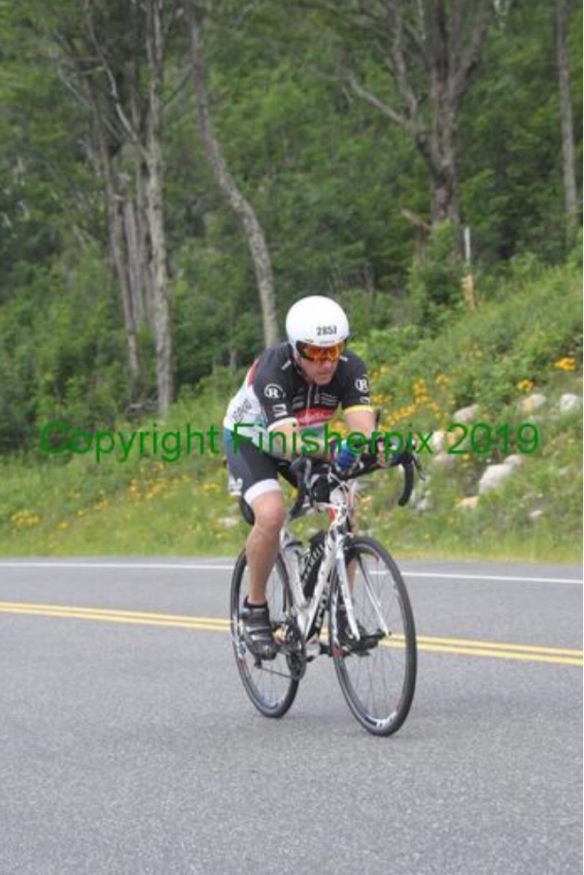 After two loops and seeing the Bears for the second (and last) time, it was time to head to transition and prep for the run. Now I had seen Kelly twice on the bike; both on the same out and back, and on the second time I had gained some ground. I saw her head turn, and she gave me a look as if to say “You’re not catching me today”. I really didn’t think I could make up the distance, but just before the last turn, there she was! I said “Hi there!” to which Kelly replied “Aw Shit!” I said “What a way to greet your friend”. Lol. We dismounted and ran into T2 together. It would be down to the run.

Before I finished the bike, I could feel my abductor muscles trying to cramp. I decided to take a Hot Shot (made to relieve cramping) just to keep it from happening. I don’t know what it didn’t mix well with, but I started getting nauseous on the run. I started out great, and caught up to Kelly, who was also nauseous, and told me to go. But after the first mile or so I had to slow it down to keep things settled.

I saw Kelly on the first out and back, and she looked 100% better. She said she drank a little Coke and that settled things down. She was strong and looking to catch me. Just the thought of drinking soda made me ill, so I just kept pushing, trying to see how far I could get before Kelly eventually caught me. I figured by mile 7, she’d be ahead.

I made it to mile 9, and to a water stop, where I was getting some ice when someone threw cold water on my back! I spun around and there was Kelly, waving and saying “Hi!” With the biggest grin. We talked for a minute and then I told her to go; she was too strong to keep up with.

The sites on the run course were amazing, seeing the Olympic ski jumps in the setting sun, and the Olympic torch lit as we finished, are forever etched in my mind. I finally made it to the entry area for the skating oval, and as I rounded the corner, the crowd noise was deafening. Then onto the Mdot carpet when you could hear Mike Reilly call out your name and say: You. Are. An. Ironman! 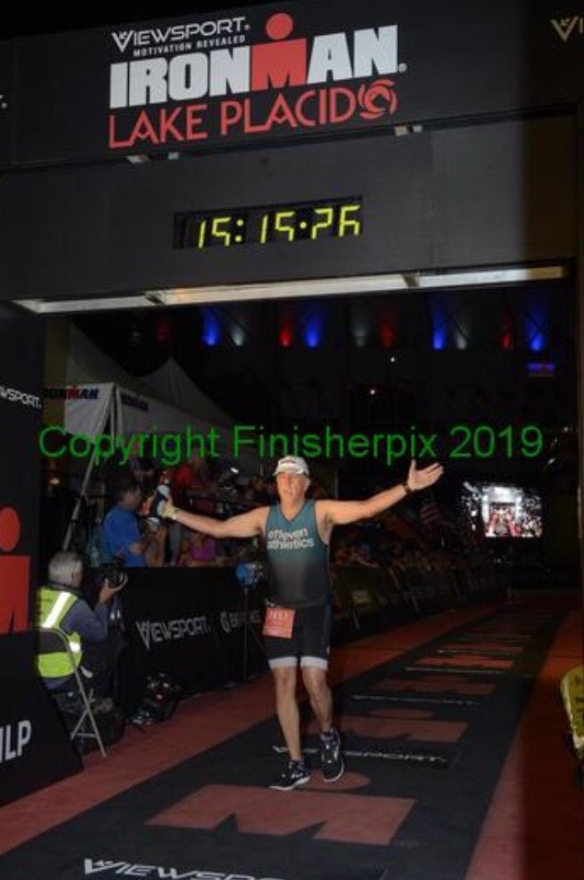 We did it! Kelly finished her 7th Ironman in 14:50:16, and I finished my 3rd Ironman in 15:03:00. It was an amazing day, and I was so glad to be out there with Kelly again. She pushes me to go harder, and hopefully I return the favor. Kelly will do Pendiction next year, and since it’s sold out, I have to find a different venue. My coach Jenni wants me to PR all three disciplines next time, so I’m looking for something flatter and faster. We will see what comes up. 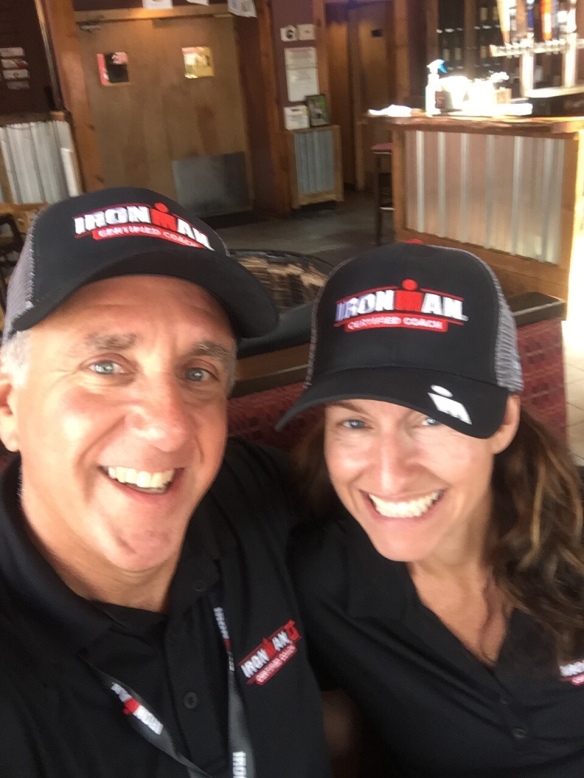 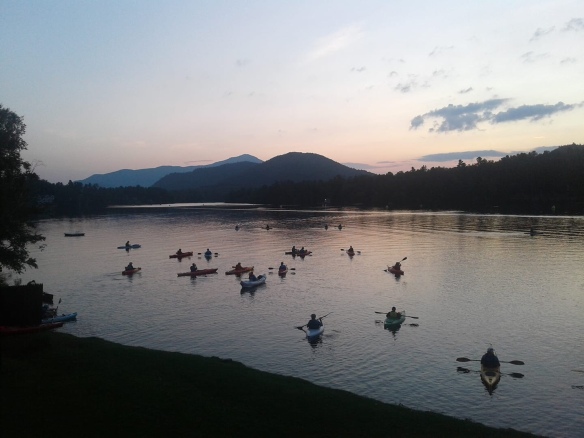 I cannot thank enough the staff, officials, volunteers, and locals who made this a memorial and amazing race! They give you a bracelet to give to a volunteer to say thank you, but I could have used a hundred of them. They were quite simply amazing!

On Tuesday, we said our goodbyes and headed back to our homes, but knowing that we will race again. Kelly’s husband is about to do his first in Mont Tremblant, and hopefully my wife Julie will compete in her first in 2020. So we made an agreement to all do Santa Rosa in 2021. California, here we come (well, sooner or later). 🙂 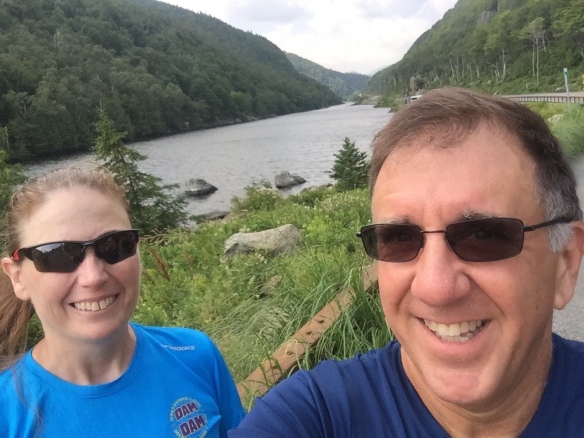